The History Of Father’s Day 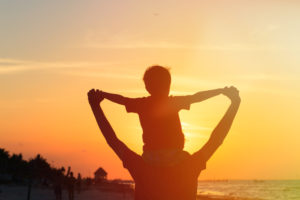 Father’s Day is quickly approaching! Let’s take a moment to understand the history of  Father’s Day, a nationally celebrated holiday. Father’s Day is observed every year on the third Sunday in June, and is considered to be an American holiday as it is rarely celebrated anywhere else in the world. Father’s Day is a day of gift-giving and expressing appreciation to all of the fathers nationwide, but how and when did this national holiday get its start?

The Inspiration Behind Father’s Day

Mother’s Day is noted as being some of the largest inspiration behind Father’s Day. After the hard fought work of Ann Reeve Jarvis, Mother’s Day slowly became a holiday that was recognized all over the nation. While Mother’s Day was gaining recognition, one person in particular thought it equally important that Americans should honor their fathers as well; that person was Sonora Smart Dodd. As a widower, Dodd’s father raised her along with five other siblings on his own. As a tribute to her father’s efforts and those like him, Dodd made it her goal to honor fathers nationwide.
Dodd believed that fathers everywhere should get their own day of celebration for all that they do for their children. On July 19th, 1910, the governor of the state of Washington announced the state’s first ever “Father’s Day”. The historic celebration took place in Spokane, Washington at a local YMCA. This was a hard fought accomplishment for Dodd because unlike Mother’s Day, many people felt as though the idea of having a Father’s Day was unnecessary. They believed that there wasn’t much need to be sentimental and tender towards fathers like many people are with mothers. It would take more than 50 years until the holiday became nationally celebrated.

The Growth of the Holiday

Since the first ever Father’s Day was celebrated, a lot has changed. Father’s Day did not necessarily have the nations’ support; in fact in 1924, President Calvin Coolidge had to urge state governments to observe the holiday. Despite his efforts many men still continued to ignore the day and go about their normal routines. The main issue was that men believed there was no need for the holiday, and that the government was using this holiday to exploit family members into spending their hard earned cash to boost the economy.
During the times surrounding The Great Depression (1929- 1939), retailers tried their best to make Father’s Day seem like a “second Christmas”. Retailers hoped that through advertising and promoting men’s products, there would be an influx of spending around the time of the holiday. However, there were still those concerned with the commercialization of Father’s Day.
Father’s Day was not officially declared a national holiday until 1972. President Richard Nixon signed a proclamation declaring that Father’s Day would be recognized as a federal holiday. The day would be dedicated as a time to honor all that our fathers have done for us. Today Father’s Day has become a day of appreciation and a time for gift-giving to those who have done so much for their children. Each year, millions of Americans buy gifts, go out to eat, or perform their favorite activities with their fathers. While millions of dollars are spent each year in preparation for this holiday, let’s not forget the most important aspect of Father’s Day-to show our greatest appreciation for our fathers and to embrace our family.

For more interesting information about American history, traditional recipes, and local festivities, be sure to read our blog, or come by the Salem Cross Inn in West Brookfield, Massachusetts. Take a moment to step back in time to the 18th century, delight in our historic house and tavern, as well as our tasty seasonal dishes!