Agriculture in the American Colonies

Agriculture in the first American colonies was much different than agriculture today. New to North America, the colonists had to make the best of the tools and crops they had brought with them from England, and work very hard to survive in a new environment.

Some of the most popular foods harvested in the early American colonies included corn, tobacco, wheat, and cotton. Methods of production were often adopted from Native American techniques, as many settlers found that their traditional ways of farming were not as effective in the New World. Popular methods included slash-and-burn land preparation, as well as the use of perhaps the most dominant tool at the time, the hand hoe. Various styles of hoes existed, and were used to create channels for proper irrigation and piles for seeds to grow successfully. 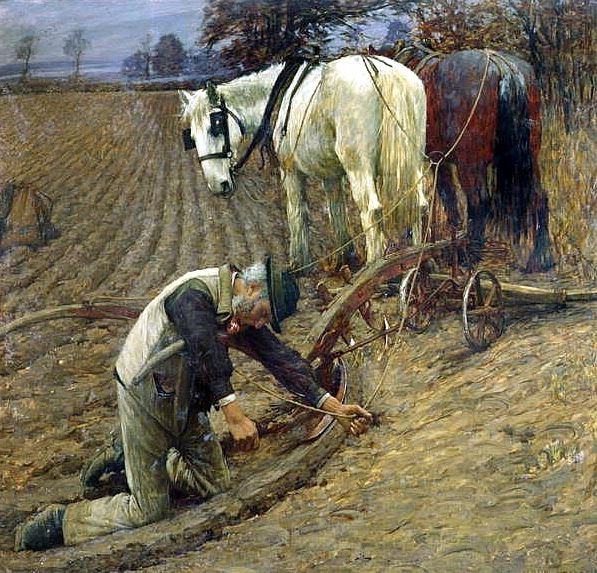 The Challenges of Farming in the Colonies

Unfortunately for the early settlers, famine and starvation were far more common than successful harvests. The farmers had to learn how to live off the land, and not all of their tried and true methods worked well on the new, American ground. Early on, most families were only able to produce enough food to support themselves, and were rarely able to bring their goods to market.

The mark of a successful early-American agricultural community was proper planning. While the majority of crops were produced in the warmer months, farm work had to occur year-round to ensure that the community would be prepared for any situation Mother Nature threw at them in the months and years to come. During the cold winter months, farmers primarily focused on catching up on tasks that were put off during the more demanding seasons. Equipment maintenance and repair, fence building and repair, ground clearing, and other tasks were tackled when crops were not in season. The cool winter temperatures also allowed communities to commence the butchering of livestock, such as pork and beef. As the year pressed onward, crops could be planted as early as March (depending on the year). Getting a head-start during the warm months was generally helpful in ensuring that all crops were properly harvested and stored by Christmas.

While crops were meticulously cared for, livestock were kept free range for the majority of the year, and until the latter half of the 18th century, were generally given little care. Domestic animals were only able to survive in the colonies if they were capable of surviving the winter, where they would rely primarily on forests and natural meadows for subsistence. The food farmers provided the animals was generally fairly minimal during the winter months, until spring came around and farmers relied heavily on spring vegetation to fatten them up again.

Take a step back in time at Salem Cross Inn! Join us for dinner, or one of our many events throughout the year. We proudly feature our very own Salem Cross Farm pasture raised beef in our scrumptious dishes, and during the warmer months, are always excited to cook with fresh veggies and herbs from our garden, just steps from our backdoor. Visit us online, or give us a call at (508) 867- 2345.