The History of the First Thanksgiving Feast 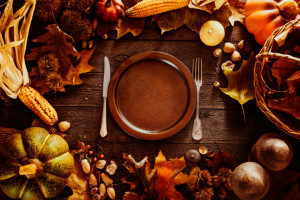 The Thanksgiving holiday as we know it took root in the mid-19th century. At this time, a letter home from a man named Edward Winslow was rediscovered and printed by Boston clergyman Alexander Young in Chronicles of Pilgrim Fathers. Winslow’s letter describes the scene at the feast, and is just one of the two surviving documents that historians can use to reference the first Thanksgiving:
“Our harvest being gotten in, our governor sent four men on fowling, that so we might after a special manner rejoice together after we had gathered the fruit of our labors. They four in one day killed as much fowl as, with a little help beside, served the company almost a week. At which time, amongst other recreations, we exercised our arms, many of the Indians coming amongst us, and among the rest their greatest king Massasoit, with some ninety men, whom for three days we entertained and feasted, and they went out and killed five deer, which they brought to the plantation and bestowed on our governor, and upon the captain and others” (Smithsonian.com).
The letter came to light during a time in which when many people felt nostalgia for the colonial era. Starting in 1827, Sarah Josepha Hale, the editor of popular women’s magazine Godey’s Lady’s Book petitioned the presidents to establish Thanksgiving as an annual holiday. Her efforts paid off in 1863 when President Lincoln made Thanksgiving a national holiday as a way to unite the country in the middle of a bloody civil war.

An Abundance of Meats at the First Thanksgiving

For many of us, turkey is a Thanksgiving essential. However, in 1621, turkey was likely not an important part of the harvest feast. Because written accounts of the First Thanksgiving are limited, historians and researchers alike must consider the environment of 17th century New England. While turkey could have been featured, it is more likely that small birds such as passenger pigeons and other wildfowl made an appearance at the meal. Venison was likely present, in addition to other easily accessible meats such as lobster, clams, and mussels.

Are mashed potatoes essential to your Thanksgiving meal? If you were enjoying a harvest feast in New England in 1621, you would not see potatoes on your dinner table. Potatoes are native to South America, and while sweet and white potatoes had made their appearance in Europe, they were not yet popular in the English diet. Instead, tubers such as artichokes, groundnuts, and water lily were likely featured at the feast.

What About Pumpkin Pie?

Often considered to be a Thanksgiving essential, recipes for pumpkin pie did not come to light until after the First Thanksgiving. Early recipes called for sliced pumpkin, rather than a pumpkin puree. If you searched for cranberry sauce at the First Thanksgiving, you would not find it either. Sugar at the time was very expensive, and it is unlikely that the pilgrims had the ability to make something so sweet with their limited supplies. So what do you serve if you don’t have sweets? More meat!

If you are interested in enjoying a delicious meal of your own, come by Salem Cross Inn in West Brookfield, MA. Enjoy a meal of historic proportions in our restored 18th century farmhouse, and delight in our many seasonal events and festivities with your friends and family. For more information, give us a call at 508-867-2345.