The History Behind Trappist Beer

If you have been hanging around any beer connoisseurs lately, you have probably heard a bit about Trappist beer. 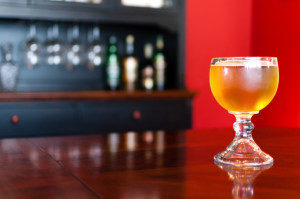 The Trappists originated as a reform from the Order of Cistercians, a Roman Catholic religious order, in La Trappe, France. Since the Middle Ages, the Cistercians have been crafting wares in order to be self-sufficient as well as contribute to the local community. These goods range from beer to jams and jellies. Even today, the money made from the beer is used solely to help maintain the monastery and to contribute to charitable causes.

Real Trappist beer always includes “Authentic Trappist Product” on the logo, after the monasteries ran into some difficulties with imposters. Authentic Trappist Product is strictly regulated. Some of its rules include being brewed inside the walls of the monastery and selling it not for profit. The quality is also highly regulated, and the monks utilize sustainable agriculture to produce the beer. Most Trappist beers are bottle-conditioned, therefore receiving their carbonation directly from the live yeast cultures. It can be difficult to pinpoint what a Trappist beer tastes like, since each monastery has their own unique brewing techniques and flavors. But the serious dedication of the monks ensures that the beer is always of the highest quality. The monasteries also each produce their own specially-designed chalice, which is unlike the shape of most beer glasses and is meant to enhance the experience of the unique Trappist beer.

The first Trappist monastery to be established in North America was a small monastery in Nova Scotia In 1811. After a devastating fire in 1900, they moved to Cumberland, RI. After yet another fire, they relocated again, this time landing in Spencer, MA, where they remain to this day.

It was exciting news when beer lovers in the U.S. learned that St. Joseph’s Abbey in Spencer, MA would begin to produce their own Trappist beer. While previously supporting themselves on jams and jellies produced in the monastery, one of the brothers expressed interest in brewing as a new source of income. The brothers spent two years gathering all of the brewing education that they could, and then built the first Trappist brewery in the United States. They are now selling the beer for public consumption.

Spencer Trappist Ale is described as “a full-bodied, golden-hued ale with fruity accents, a dry finish, and a light hop bitterness.” The yeast and barley used in the beer has been hand-grown by the monks, and was produced with the mineral-rich glacier waters of Spencer. The blend is completely unique to anything ever produced.