The Hexmark and the Salem Witch Trials 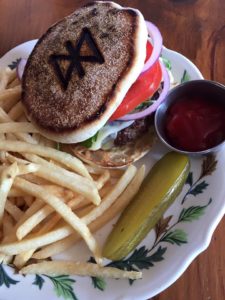 West Brookfield and the Salem Cross Inn lie about ninety miles from the well-known “Salem Witch Trials.” An often talked about, well-known, “New England” thing, the Salem Witch Trials have sparked both controversy and Halloween spirit throughout our state.  The Salem Cross Inn has a little piece of the original “spirit ward” right on our front door.

Superstitions of the Salem Witch Trials

The Salem Witch trials created numerous superstitions throughout the entire Puritan society. As Puritans, they believed that Satan was present. What originally began in Europe, then moved over to colonial America right here in Massachusetts. They thought that in order to be able to believe in God and the angels, you had to believe in the evil spirits as well. The large hysteria behind these superstitions is what led to the Salem Witch trials that you can read more about here.

At first sight, the hexmark appears as a Roman numeral 10, or two triangles, with a line across the center of it. There were many symbols that related to the witch trials, many symbolized whether you believed in the actual Puritan ways. The hexmark was meant to ward off “ye evil spirits of deviltry” that the supposed Salem Witches “carried” with them. If you had this on your door, it was to show others you believed in the superstitions that came with wanting the good spirits. Those who did not believe in the accusations of the witchcraft put themselves at risk if they did not show they stood behind the Puritans, therefore making themselves targets.

The Hexmark at Salem Cross Inn

John White, the original land owner, received a land grant from the inhabitants of Brookfield in 1707.  The Hexmark, or Salem Cross, was found on the home’s original front door. The Salem family, led by Henry and Dick, restored the White farmhouse in the late 1950’s and early 1060’s. The original name of the establishment was the “Peregrine White House” but after one month, the name was changed to the Salem Cross Inn from the inspiration of the symbol found on the door. The only reason they did not change it sooner was because their first bride had already sent out her invitations with the original name! (See, we have been good to our brides even from the beginning).

Come see for yourself, the hexmark is a symbol of good intention and hope that no “evil” enters at the Salem Cross Inn or the Hexmark Tavern. It’s a great place to grab a drink, gather with friends, enjoy a delicious meal and embark in the history of the Salem Cross Inn. For more information on upcoming events and registration, please visit our website here. We would love to see you at one of our colonial-style events.