The History of Restaurants in America 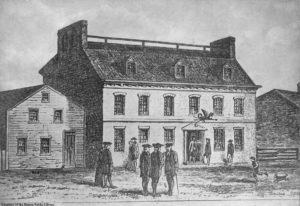 Restaurants today are such common place that it is easy to take their existence for granted. Can you imagine a time in society when restaurants did not exist? That’s right, at one point in time (not very long ago, we might add) the idea of “going out to eat” was nonexistent in our society.  Today, we will discuss the growth the history of restaurants in America, and how they got their start from inns and taverns.

While public eateries existed in Ancient Rome and China, restaurants as we know them today got their start in 18th century France. In fact, the word “restaurant” comes from the French word “restaurer” which means “to restore.” Before the French revolution, public spaces opened that sold hearty meals such as meats and soups to people who were not feeling well (to “restore” their strength). Many of these establishments would sell their foods to hungry patrons as well.

Prior to the American Revolution, taverns were very popular, as travelers needed a place to rest and to water their horses. Around Boston, roads that were frequently used for travel had taverns every few miles. In towns and cities, taverns were much more plentiful and served first and foremost as a social hub. Town meetings were held here, as well as political happenings. Believe it or not, before and after sessions of the first continental congress, delegates met at a  tavern that still stands today in Philadelphia!

Taverns even served as our nation’s first post offices. Such a common place for travel, townspeople would leave their letters at taverns for travelers to deliver when they arrived at their destinations. Such an important social hub, county officials often supervised their operations, often appointing widows as suitable innkeepers.

After the revolution, the French popularity of such establishments made its way over to America. Prior to being referred to as “restaurants”, the establishments assumed regional names such as “eating houses” in New York City, or “restorators” in Boston. The foods in these new houses was heavy, and often mediocre at best. Keeping meats fresh was difficult, so it was common to see chicken and pork dishes, as chicken was easy to butcher and ham was easy to cure, dry, and store. Establishments created set hours for dining, and patrons would come to eat whatever was being served, as menus were not common place. This all changed in 1828, when the Tremont House opened in Boston. They inaugurated “French Service” which involved patrons eating at individual tables within a two-hundred-seat dining room. Within five years, these early restaurants began to become commonplace at inn and hotels as well.

If you are interested in learning more about the history of American inns and taverns, come by Salem Cross Inn in West Brookfield, MA. Delight in our delicious seasonal menu, take a stroll on our historic grounds, or bring your family for one of our many seasonal events! Visit us online or give us a call at (508) 867-2345 to make your reservation!