We all face a similar problem from time to time: the fresh produce bought at the grocery store somehow makes its way to the back of the fridge behind the tubs of frosting and packages of bacon. 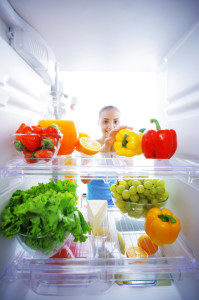 You were going to eat your veggies, you really were! But somehow they seem to go bad before you have the chance, and your crispers look more like compost bins than anything containing edibles.

Store Leaves with a Paper Towel

Sick of your fresh herbs and lettuce turning brown and wilted? It’s probably caused by too much moisture in the air. Wrap a bunch of herbs in a paper towel before sealing it in a Ziploc bag, and lay a paper towel over your salad before wrapping it in plastic wrap. Refrigerate to prevent wilting.

Wrap celery in a paper towel, then inside tin foil before storing in the crisper. You can also store corn that has already been husked in tin foil. (But make sure that you label which is which!)

Do not refrigerate tomatoes or bananas, as it will cause them to ripen faster. Bananas produce a lot of ethylene gas, which can also cause other produce to ripen quickly if stored near them.

Store onions in a cool, dry place. Despite what you’re probably used to, it is not a good idea to store onions and potatoes together. They cause each other to spoil faster, but can last up to a month if stored properly. Instead, store potatoes with apples and it will help keep them from sprouting eyes.

Store asparagus in a jar filled with water. This can also be done for fresh herbs and green onions if your home isn’t too humid.

Make sure that your refrigerator is no warmer than 40° Fahrenheit or it will also expedite ripening.

Don’t keep milk or other easily-spoiled food on the refrigerator door, as its temperature is less regulated than the rest of the fridge.

If you are frustrated with the state of the produce in your fridge, perhaps it’s time to consider dining out. At Salem Cross Inn, all of the food that we serve is made with fresh ingredients sourced from local farms. We never need worry about produce ripening too quickly here, because our guests like to eat it all before it has the chance! Contact us to make a reservation and find out what the talk is all about.